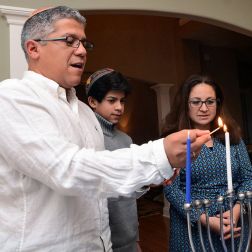 Schild, Scott. Yosef Spinoza lights his family’s Hanukkah Menorah starting with the Shamash candle in the center, Wednesday at his home in Fayetteville. His son, Ari, 12, and wife, Zulma Tovar-Spinoza look on. 2013. Web. 19 Dec. 2014.

Garcia, Eugene. A hungry crowd gathered to grab a bite from a cupcake menorah after its lighting at Irvine Spectrum Center in Irvine, Calif., Dec. 9. The Chabad of Irvine sponsored the event where hundreds of cupcake. 2012. Web. 18 Dec. 2014. 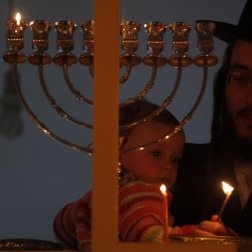 Ratner, Baz. An Ultra-Orthodox Jewish man holds a child as he lights a candle for the Jewish holiday of Hanukkah in Jerusalem’s Mea Shearim neighbourhood. Hanukkah or Chanukah is the Jewish Festival of Lights. 2011. Web. 18 Dec. 2014.

Sultan, Abir. An Ultra-Orthodox Jew with his family lights the second Hanukkah candle inside his house during the Jewish holiday of Hanukkah in the Mea Shearim neighbourhood of Jerusalem, Israel, 17 December 2014. 2014. Web. 19 Dec. 2014. 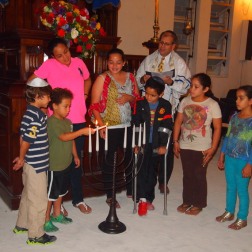 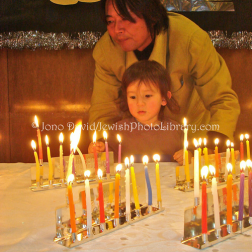 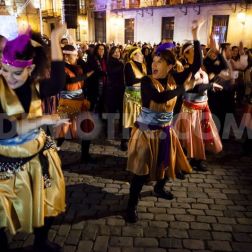 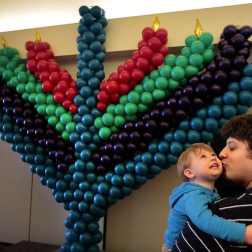 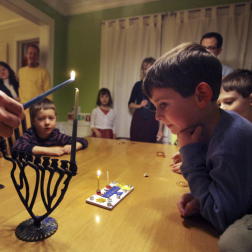 Joles, David. Henry Mrotz, 5 years old, right, watched as his mother lighted a menorah in Minneapolis on the first day of Hanukkah on Dec. 8. Observant Jewish people light a candle each night to mark the holiday. 2012. Web. 18 Dec. 2014. 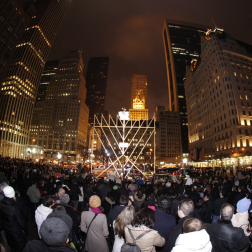 Lubavitch Youth Organization. Rabbi Shmuel Butman and Tamir Sapir lighted a menorah that weighs thousands of pounds and has real oil lamps, protected from wind by glass, at the edge of Central Park in New York on Dec. 8. 2012. Web. 18 Dec. 2014.

Cerri, Lara. A boy hugged his father after his family lighted candles in their St. Petersburg, Fla., home on Dec. 8. The holiday lasts eight days because according to tradition, when Jewish people rededicated a te. 2012. Web. 18 Dec. 2014. 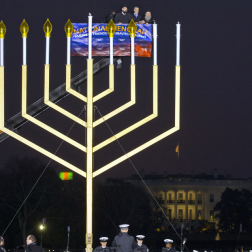 Before I get started, I want to apologize for my inconsistent blogging. I am having problems with WiFi, and it is becoming increasingly difficult to upload everyday when the internet is moving at a snail’s pace. The frustration has made me want to give up, but I am doing my very best to stay positive and push forward in the spirit of Christmas & Hanukkah. Speaking of which, I hope you are not opposed to a Hanukkah-related post because that is what this is. If you are not interested, feel free to skip this post and wait for the next. The art I am spotlighting today is a little different from what I normally post, but I hope you will have an open-mind. Photojournalism is as much of an art-form as illustration and painting etc. Photojournalists have the difficult task of taking poignant photographs to accompany story after story after story, most of which are not pleasant. However, photojournalism is not always bad news; it can also make people smile. Today I am spotlighting photographs that show the diversity within Jewish culture. Over time, Jews have been dispersed throughout the world due to various circumstances. I speak for myself when I say it is beautiful to see people of all different shapes and sizes and colors uniting to celebrate the same holiday. I hope you feel the same way! That is all I am going to say in this post. I will let the photographs do the rest of the talking. Each photo is accompanied by the name of the state or country in which it was taken. I did my best to find photos of Hanukkah celebrations in every part of the world, but please take into consideration that Jewish communities such as those in Asia and Africa are very small and predominantly undocumented. Enjoy!

These are the artists in order of appearance in the photo gallery; some are unknown and therefore not listed:

Sywenkyj, Joseph. Jewish Hanukkah is commemorated by lighting candles on a special candlestick with nine branches called a hanukkiyah. Each day of the eight-day festival, a candle is lit and a prayer is recited, as seen in this photo taken during the Yudkevych’s family celebration in Kyiv on Dec.3. Head of the family, Dmytro (M) teaches his children Jewish history and traditions, the knowledge of which he lacked growing up amid repressions in the Soviet Union. 2010. Web. 19 Dec. 2014. (Image 19)

Your comments and feedback are very important to me. :) Cancel reply